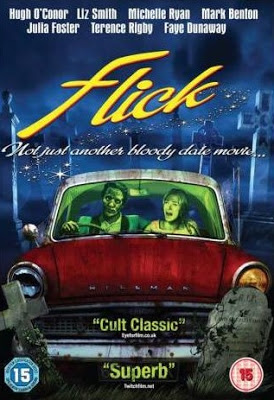 
Memphis cop Lieutenant McKenzie is called to England to investigate a series of strange deaths and weird sightings following the resurrection of a murderer from the 1950s.

He has been brought back to life in modern times and tries to find his teenage sweetheart who is now aged 62 and to seek revenge for his death.

Special Features
Review
'Flick' is one of those weird movies that is so bad that it's good yet that's an intentional choice by the people that make it.

Here they have made a horror comedy movie that both pays homage to the old 50's horror movies and also has fun with them.

There are also nods to comic books as well and even moments in the movie where it tells parts of the story in comic book form. I thought that was a good touch and really adds a layer to it to make it look different to the other zombie movies out there.

The special effects in this movie are low budget but very nicely used. The blood splatter during the deaths is done in a cartoon style way and that makes the deaths have a bit of an otherworldly feel to them. Kind of like a comic book meeting real life.

The cast are obviously having a hell of a lot of fun during this movie. Especially Faye Dunaway, who plays a Memphis cop with one normal arm and one prosthetic arm. The prosthetic arm added a lot of humor to proceedings, albeit unintentionally, because there were scenes where it was blindingly obvious her real arm was tied to her side and scenes where that arm was massively longer than the real arm. The rest of the cast don't take the movie too seriously and that kind of adds a bit of the 'Bruce Campbell' syndrome to proceedings in that while it's not a great movie, it is a massive amount of fun to watch.

The lack of special features mean that the score for this movie is much lower than I would want it to be but then again, I can't really rate the special features if they are not there can I?

While not a good movie per se, this is one of the funnest and most hilarious movies that I have seen in a very long time so pick it up, turn off your brain and enjoy a movie that Bruce Campbell would be proud of.
Movie 4/5
Picture 3.5/5
Sound 4.5/5
Special Features 0/5
Overall 12.5/20
Posted by Pat Scattergood at 07:02