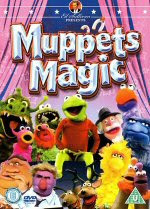 Jim Henson as Various Muppets
Ed Sullivan as Himself


Long before America came to appreciate the talents of Jim Henson and his brilliant creations, The Muppets, Ed Sullivan had the foresight to identify with Henson's enormous creativity and provide him an opportunity to introduce his unique characters to the American public.

With Henson's first appearance on September 18, 1966, The Muppets began to capture America's imagination, breaking down our old conceptions of what could be done with puppetry, challenging us to embrace these creatures as living and thinking beings. Not only does this program introduce us to Kermit, we can also see the beginnings of other Henson characters we've come to know and love, including reindeer discussing Christmas deliveries, singing cows, a monster engulfing a computer, and Kermit swallowing a worm. The charm and warmth that captured children and adults with these inventive segments first aired are just as powerful and compelling today.

Special Features
Review
Ed Sullivan, during his career, became known for giving unknown and untested people chances to shine during his 20+ year show.

Jim Henson is one of those people. After Ed Sullivan debuted the Muppets and Jim Henson on the 18th September 1966 edition of his show, peoples perception of what could be done with puppets started to change.

Here on this release we see those early appearances of the now familiar characters and of early versions of what are now family favorites.

There is an absolute plethora of treasures that all the family will enjoy, even the bigger kids amongst us.

The transfer here, considering a lot of the footage is from the late 60's and early 70's, is superb. The sound struggles a tiny bit on the really early ones but that's to be expected when you remember that the footage is nearly 50 years old. The picture transfer however is absolutely fantastic all the way through.

The special features aren't exactly overwhelming in quantity but the two extra Ed Sullivan segments are really good. My favorite being 'The Muppet String Quartet' segment, which had me in hysterics.

If you are a Muppet fan then you are definitely in for a treat if you pick up this release. Even if you're not a fan, there really is something for everyone here. Some of the things that they do with the puppets is quite frankly amazing.
Movie 4/5
Picture 4/5
Sound 3/5
Special Features 3/5
Overall 14/20
Posted by Pat Scattergood at 15:06