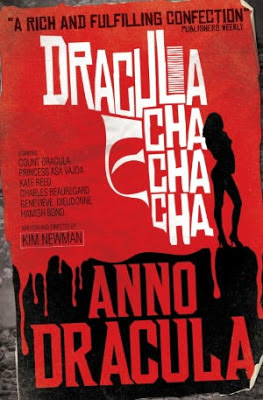 
Written by award-winning novelist Kim Newman, this is a brand-new edition, with additional 40,000 word never-before-seen novella, of the popular third installment of the Anno Dracula series, Dracula Cha Cha Cha.
Rome. 1959. Count Dracula is about to marry the Moldavian Princess Asa Vajda - his sixth wife. Journalist Kate Reed flies into the city to visit the ailing Charles Beauregard and his vampire companion Geneviève. Finding herself caught up in the mystery of the Crimson Executioner who is bloodily dispatching vampire elders in the city, Kate discovers that she is not the only one on his trail...

As a fan of Kim Newman's reviews and their quite cynical humor yet I never had gotten around to reading any of his novels.

I finally got my hands on this, the third installment of his 'Anno Dracula' series and opened it up with very high expectations.  Sadly, it turned out that all I was in store for a pedestrian story with some really cliched characters and bad attempts at humor.

The writing style isn't bad and quickly paced and to the point but the book itself seems to suffer from a crisis of identity.  The characters based on real life movie characters come across as a list of badly written puns and piss takes.  Take the vampire spy for example.  His description is, deliberately, that of Sean Connery and the character is called 'Bond, Hamish Bond'.  While I will admit that got a bit of a giggle out of me, it was moments like those that really seemed to clash against the violence and graphic nature of the murders that are dotted throughout the story.

When written dead straight, the novel is actually really interesting and attempts to offer up something new to vampire fans.  It's the attempts at humor that I mentioned before that ruin it for me.

I'm not really sure what else I can say that wouldn't resist in little more than a list of spoilers for you guys and I'm not in to reviews like that so let's leave you with one thought from my little geeky mind.