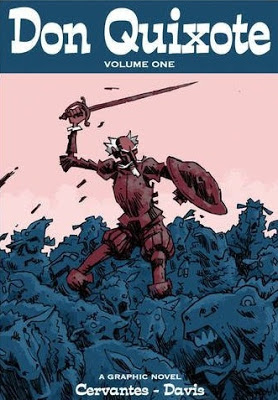 
In a sleepy village in medieval Spain, a retired country gentleman spends his waking hours consuming tales of chivalry.
Seeing no impediments, such as logic, propriety or sanity, to fulfilling his dreams, this would-be hero reinvents himself as the Knight-Errat, Don Quixote. He sets out across the arid open country in search of adventures accompanied only by his faithful steed, Rocinante, and his dim-witted squire and sidekick, Sancho Panza. Don Quixote Volume 1 perfectly captures the spirit of this classic novel in graphic novel format.

Don Quixote has always been been a personal favorite for me out of all the classics of literature and has been adapted in to so many mediums. Terry Gilliam even attempted to film it with Johnny Depp starring. Alas that didn't come to fruition yet here is an absolutely fabulous adaptation by the writer/artist Rob Davis.

Davis has managed to take the classic story by Cervantes and created a flowing and adapting story where you can't help but want to turn the next page. In fact, I read it in one sitting, went and got a drink and promptly started reading it again. One of the things I really like is that the more times you read it, the more things you notice in the story. Even the background seems to come alive during the story.

The characters are drawn beautifully and Davis shows just how masterful an artist he is by making the characters come to life and their personalities just explode off of the pages. The amazing use of shadows in key scenes really make this unforgettable.

The writing is fantastic and while Davis keeps the language of the original tale, he manages to still make it sound relevant and up to date without completely changing the feel of the story itself.

All in all an absolutely masterful adaptation of a classic book.

Posted by Pat Scattergood at 15:28