Doctor Who: The Nth Doctor by Jean-Marc Lofficier Review 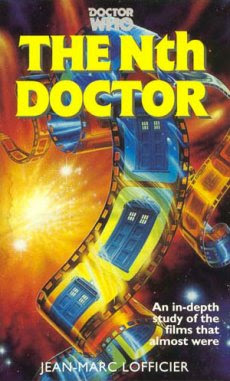 
Since 1977, when Tom Baker and his co-star Ian Marter tried to produce a film to be entitled "Scratchman", several different companies have held options to produce a Doctor Who film....

....including Green Light Productions, Lumiere Films, Amblin Entertainment and BBC Enterprises. These projects have always obsessed Doctor Who fans, partly because they were and remain shrouded in secrecy. The show's absence from our screens for seven years only served to heighten the importance of these projects, as fans were starved of new Doctor Who.

This volume contains a detailed plot summary of each script, an account of the circumstances of its creation and the reasons why it was never made, as well as interviews with the various writers. The book also explores the roles and input of the big names associated with each project - men such as Steven Spielberg, Leonard Nimoy and Johnny Byrne.

When this book was published in 1997, the Doctor had been gone from our screens for many years. Many studios and individuals had tried to create scripts for movies that would herald his return to the screens with no luck or success whatsoever.

These various movie projects have always interested me due to the simple fact that not a lot was known about them at the time. Like the review of this book said they were ‘shrouded in secrecy’ from the plotlines, to the stars that would be involved and even down to the crew members that would make each movie.

This book goes a bit of the way to dispel some of the rumors and whispers to create an in-depth look at the scripts and stories themselves that actually existed.

It really goes in to detail by using interviews, explores the roles of some the big names attached to each project and even goes in to detail about why the movies were never made. For a ‘Doctor Who’ fan such as myself, I found this side of the book very interesting although sometimes the writing seemed to lack a little bit of emotional investment in the subjects, which is a shame considering how passionate the people were that tried to get the movies themselves made.

All in all an interesting read for fans of the show and relatively easy to pick up considering the age of the book. Even though the Doctor is back on our screens, it’s still interesting to see the different ideas various people had for the character because the shows most recent and successful revamp in this rather interestingly aged book.  Worth picking up even if you aren't a fan of the show itself.

Posted by Pat Scattergood at 11:35