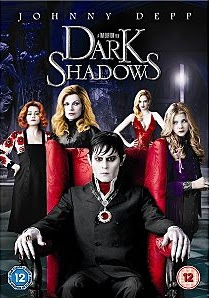 In the year 1752, Joshua and Naomi Collins, with young son Barnabas, set sail from Liverpool, England to start a new life in America. But even an ocean was not enough to escape the mysterious curse that has plagued their family.

Two decades pass and Barnabas (Johnny Depp) has the world at his feet-or at least the town of Collinsport, Maine. The master of Collinwood Manor, Barnabas is rich, powerful and an inveterate playboy... until he makes the grave mistake of breaking the heart of Angelique Bouchard (Eva Green). A witch, in every sense of the word, Angelique dooms him to a fate worse than death: turning him into a vampire, and then burying him alive.

Two centuries later, Barnabas is inadvertently freed from his tomb and emerges into the very changed world of 1972. He returns to Collinwood Manor to find that his once-grand estate has fallen into ruin. The dysfunctional remnants of the Collins family have fared little better, each harboring their own dark secrets. Matriarch Elizabeth Collins Stoddard (Michelle Pfeiffer) has called upon live-in psychiatrist, Dr. Julia Hoffman (Helena Bonham Carter), to help with her family troubles.

As a fan of the television series, both the original and the attempted revival, I had extremely high hopes for this.  I knew that while it wouldn't be the same, it would still be a good quality and well shot look at the life of an immortal being wrestling with his soul or lack thereof.

While on some parts we got that but in others we got something completely different.  Just recently Tim Burton movies have started to be a little hit and miss in places.  This one is no different and suffers from the same problem that 'Charlie and the Chocolate Factory' suffered from in that the movie would one moment be quite a dark look at the characters but then be an attempted comic look at the darker side of life.  Because of that, 'Dark Shadows' is quite a disjointed movie.

It seemed as though Tim Burton was have a bit of an identity crisis while making this movie.  On one hand, parts are serious and have a great nod to the series that it is based on.  In fact, those parts come across as a good quality horror / thriller and the characters are portrayed as such but then moments later, it's slapstick 'fish out of water' comedy and the two parts just don't gel.  That really is a shame because the cast is superb and do really well in their performances.

The stand outs for me were Johnny Depp as Barnabas, who seems to be the only one who can balance the comic and serious sides of the movie.  He really gives Collins a sympathetic tint as well as a menacing side and that works very well.

Another stand out for me was Chloe Grace Moretz, whom I have become a massive fan of after seeing her in 'Kickass', who really played the part of surly teenager with a secret in a memorable way.  It was just a shame that the twist in her part of the story came across as quite a cliche.

I would be remiss if I didn't mention Jackie Earle Haley, who is famous for his role in 'Watchmen' and the remake of 'A Nightmare On Elm Street', and is completely unrecognisable here as Willie Loomis, part of the comic relief of the movie.

The special features here are quite disappointing too.  Only an ultraviolet version of the movie and short look at the making of.  You wouldn't really be missing all that much if you didn't watch them if I'm completely honest about it.

All in all, I had very high hopes for this movie.  Not only because it was based on a television show I liked but because it was another team up between Burton and Depp but what I got was a disjointed movie that couldn't decide what kind of movie it wanted to be.  Don't get me wrong, it's not an awful movie in the slightest, it's just quite disappointing in places.