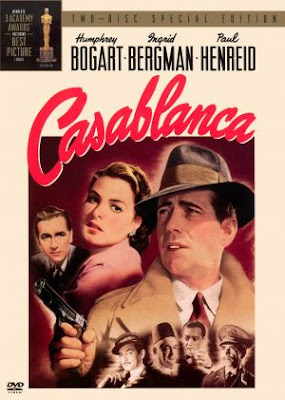 Written By Julius J. Epstein, Phillip G. Epstein, Howard Koch and Casey Robinson based on 'Everybody Comes To Rick's' by Murray Burnett and Joan Alison
Directed By Michael Curtiz

Casablanca: easy to enter, but much harder to leave, especially if your name is on the Nazis' most wanted list. Atop that list is Czech resistance leader Victor Laszlo (Paul Henreid), whose only hope is Rick Blaine (Humphrey Bogart), a cynical American who sticks his neck out for no one, especially Victor's wife Ilsa (Ingrid Bergman), the ex-lover who broke his heart. So when Ilsa offers herself in exchange for Laszlo's safe transport out of the country, the bitter Rick must decide what's more important - his own happiness or the countless lives that hang in the balance..

What can I say that hasn't already been said about this absolute landmark movie.  Instantly quoteable, most definitely memorable and full of amazing performances, it has a reputation as being one of the best movies ever made.  Does it deserve that reputation?

Yes it does and then some.  The cast here is absolutely perfect and plays their roles absolutely brilliantly.  They really all seem to inhabit their characters as if they were an extension of their own persons.  The best of these by far are the performances by Claude Raines, Peter Lorre and, of course, the legendary performance by Humphrey Bogart.

Claudes plays Renault with such a subtle nature that it's incredibly hard to see which side the character is on right until the end.  In fact, the performance is so strong that it absolutely grips you until the incredibly famous ending no matter how many times you have watched the movie itself.

Peter Lorre as Ugarte gives a wonderfully slimey portrayal and in places can really make the viewers skin crawl.  The interaction between his character and Rick, played by Bogart is superb and you really do think that Rick despises him without it falling in to meldrama.

Humphrey Bogart gives a heartfelt performance as Rick and really owns this movie.  In fact, he is so good that I honestly think this movie wouldn't be half as good if not for him.  The quality of his performance makes the character so multi-layered that, for once, it's not a cliched character in a war movie.  The intereaction between Rick and Ilsa just absolutely sizzles with a romance and sexuality rarely seen in movies of today yet alone movies from the Golden Age of Hollywood.  You spend the entire movie feeling the pain that Rick is in and it really moves the viewer.  It was also nice to see a character that was bitter and cynical about life without it being over acted.  I also loved the relationship between the character of Rick and that of Sam, played by Dooley Wilson.  Sam really comes across as, weirdly, a father figure to Rick and as someone who is just trying to protect him from getting hurt again.  There's loads of unspoken history between the two of them and it's brilliantly portrayed.

The other performances by the extremely beautiful Ingrid Bergman, Paul Henreid and Conrad Veidt really give the movie a strong backstrong from which to lure the viewer in to the world that has been directed with such a subtle hand by Michael Curtiz.

The special features here are some of the best that I have seen on any movie release let alone a classic movie release.  The introduction by Bogarts widow, Lauren Bacall, and then the accompanying documentary presented by her was very nicely done and really gave the special features a personal tint to them.  The newly found deleted scenes were great as well as it was brilliant to see just what they had taken out after reading so many things about scenes that hadn't made it in to the movie itself.  There are so many special features, some of which have some amazing surprises in, that I don't really want to spoil them for you.  Let's just say that these are some of the best special features that I have ever seen in a movie release.

All in all, this classic movie deserves all the plaudits and it's reputation as being one of the best movies ever made.  I can't honestly believe that it only won three Academy Awards, I feel it should have won many more than that.

In fact, I would even go so far as to say that it is one of the most perfectly cast, written and acted movies that I have ever seen and I can't recommend it high enough.

An absolutely essential release for anyone  that wants to see just how to make a movie.