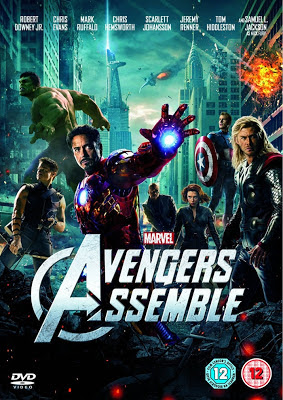 
When an unexpected enemy threatens the Earth, there is only one thing left to do.  Assemble!
Spanning the globe, a daring recruitment effort begins for Earth's mightiest heroes. Iron Man (Robert Downey Jr.), Captain America (Chris Evans), The Incredible Hulk (Mark Ruffalo), Thor (Chris Hemsworth), and two of the world's greatest assassins, Black Widow (Scarlett Johansson) and Hawkeye (Jeremy Renner), must assemble to defeat Loki (Tom Hiddleston), the darkest villain the Earth has ever known.

Review
When I saw this at the cinema, I was blown away by the sheer spectacle of the movie. It's one of those 'go large or go home' type of movies. I was a bit worried that some of that may be lost when it was released on to DVD and Blu-Ray.

I really shouldn't have worried. That 'big time' movie feel is here and is as loud and brash as ever.

In fact, it works a bit better on a smaller screen just for the simple fact that it gives the viewer more of a chance to notice the little things in this movie like the nods to the characters pasts, the little nods to the comic books and it's things like that that make this movie absolutely superb.

I would even go so far as to say this is by far, the best Marvel comic book movie that I have seen.

The team itself consists of Iron Man, Black Widow, Hawkeye, The Incredible Hulk, Thor and Captain America but it's the fact they don't all automatically get along that makes this movie better than the normal bog standard hero team up movies that we sometimes get.

Also, the characters are all given more than enough time to breathe and grown before the proverbial shit hits the fan.

The action set pieces themselves are full on and in your face and for once, that doesn't ruin the movie. You needed a big spectacle like this for the movie to work and Whedon has delivered that in spades and then some.

One of the things I noticed the most about this movie is that you can really tell that it's a Joss Whedon movie by the great action, great characters and flashes of great humor yet it still maintains it's sense of identity as a Marvel movie.

The only disappointing thing about this release is the sever lack of special features, which in all honesty has lead me to one conclusion. I would bet money on there being a special edition of the movie out by Christmas that has an absolute bucket load of special features etc on it.

Other than the minor quibble about the lack of special features, I can't honestly recommend this any higher than I already have.

You have an exciting story, great characters, an absolutely fantastic cast that really bring the characters to life and flashes of humor that had me in absolute hysterics more than once during the movie.