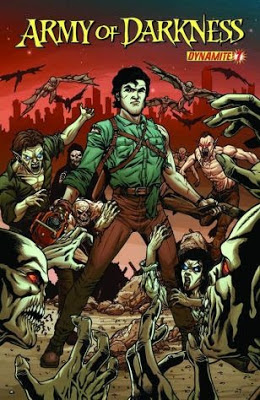 Ash and Ted are guarding the gates of Hades from the hoards of demons that batter against their down every day.  When a mysterious stranger arrives, Ash has finally find another compadre to fight the good fight.  Or has he?

Issue 6 was full of 'Evil Dead' goodness with fast paced action and quips a plenty.  Here they have taken a different tact.

Revealing that there are different version of Ash across many different universes, this tale takes place in the bowels of Hades itself.  Ash, alongside his Deadite companion Ted, is guarding the door that leads to the human world against the countless demons that want to take over the universe.

While different from Issue 6 in many ways, this story gives a different spin on the 'Evil Dead' mythos and it works really well.  Along with a twist ending, this is a superb issue of the run.  Another good thing about Serrano's writing is that even though it's part of a much bigger picture, these issues are able to stand on their own two feet as well.  Even if this is the first time you have picked up one of the 'Army of Darkness' titles, you won't feel lost as they make superb use of quick flashbacks here and there.

The artwork is by Dietrich Smith, who did the superb artwork for Issue 6 but for some reason, it doesn't work as well in this issue.  In some places, it seems quite cartoony yet in other places it works very well.  In issue 6, it was consistantly good whereas here it's quite hit and miss.  I did however really like the cover by Marcio Fiorito, that was superb.

All in all, while not as good art wise as Issue 6, the story more than picks up the slack and makes it a worthwhile and entertaining title to pick up the next time you grab your comic books.