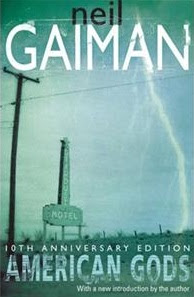 
After three years in prison, Shadow has done his time. But as the time until his release ticks away, he can feel a storm brewing.

Two days before he gets out, his wife Laura dies in a mysterious car crash, in adulterous circumstances. Dazed, Shadow travels home, only to encounter the bizarre Mr Wednesday claiming to be a refugee from a distant war, a former god and the king of America.

Together they embark on a very strange journey across the States, along the way solving the murders which have occurred every winter in one small American town. But the storm is about to break...

Disturbing, gripping and profoundly strange, Gaiman's epic new novel sees him on the road to the heart of America.

Neil Gaiman has always been known for writing stories with a bit of a super natural tint that border halfway between disturbing and very strange.

His work on the 'Sandman' series of comics were absolutely superb and it's the same here.

'American Gods' starts off slowly and subtly but as the story slowly picks up steam all the little pieces of information slot together to make one gigantic picture.

There are many twists and turns along the way but instead of getting the reader muddled up in so many new characters, gangs, motives etc, they kind of surround the reader and get them more involved in the story itself.

The characters are very well written, although we shouldn't expect any less from the creator of the 'Sandman' characters. Each character in this novel, including the minor ones, all have their own personalities and motives, which really raise the quality of the story. You really get involved in Shadow's adventure and with his interactions with the spirit of his wife, who may or may not exist.

One of the things I liked the most about this book is no matter how fantastical the story started to get, Gaiman still managed to make it seem so believable that it felt like it could happen in the real world. That takes a lot of skill to be able to do that and he has that in buckets here.

I honestly can't recommend this book enough. I was gripped through out the entire novel and the story itself really stayed with me long after I had finished it.

Posted by Pat Scattergood at 13:58