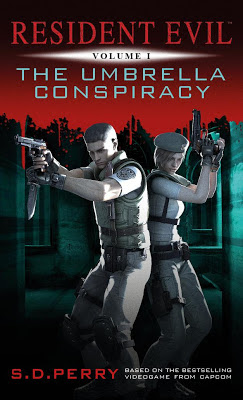 
Raccoon City: a remote mountain community suddenly besieged by a rash of grisly murders. At the epicenter, a dark secluded mansion belonging to the mysterious Umbrella Corporation.
Deployed to investigate the strange goings-on is the Special Tactics and Rescue Squad (S.T.A.R.S.) but what unfolds as the team penetrate the mansion's long-locked doors is terror beyond their worst nightmares.

I've always been quite a big fan of the 'Resident Evil' games and of the movies so I was really looking forward to reading the novel.

'The Umbrella Conspiracy' is the first of a series of novels based on the actual games by Capcom and not the movies. Weirdly, that manages to be one of it's strengths and one of it's weaknesses.

The story itself stays very faithful to the story of the first 'Resident Evil' game and that's where one of the problems appears. In places it just seems a little bit like a walk through guide for the game itself instead of a novel but there were quite a few nods to the games themselves that were pretty well done. My favorite being the mention of a typewriter with a blank bit of paper in it being a strange ornament for a mansion, a nice touch considering that's how you would save your progress in the game.

The characters are a little bit cliched but they have been pretty much lifted lock, stock and barrel from the game itself. That said however, they're not badly written and S.D. Perry has added a couple of extra layers to them regardless of how important the character was. I thought that was a nice touch because it did improve the characters a little bit. I did like the little digs by Chris about the whole situation being like a bad zombie movie.

S.D. Perry is famous for her novels based in the world of 'Star Trek: Deep Space 9' and was a pretty good fit as the writer here. The way she references the source of the story and stays faithful to the theme and the characters is very well done. She does add a non game character in the shape of a mysterious person called Trent so I'm quite looking forward to seeing where she takes him story wise.

While not perfect I would definitely recommend to fans of the 'Resident Evil' games because it does do the general theme and atmosphere of the games themselves. I'm quite eager to give the next novels in the series a try as well so it's well worth picking up for the fans.