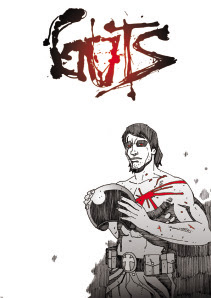 
An  elite team of future cops are despatched to investigate a grizzly massacre at a stately home.  They think they know what to expect...but boy are they wrong!

Review
Originally published as two 'floppy' comic books and then as a digital comic, 'Guts' has finally moved in to the realm of being a printed graphic novel and it's a welcome addition to the genre.

Dave Neal has managed to craft a stark story full of dread and menace with each passing page.  It plays out like a mix of 'Judge Dredd', 'Scanners' and 'The Shining', the latter being the most obvious influence and moves along at an incredibly quick pace.

The characters here wouldn't be out of place in a 2000AD comic book and that's what I love about them.  While they don't have complex back stories or motives to be doing what they are doing, they really don't need it for this release.  The story speaks for itself and it says volumes.  One of the major strengths of this book is that Neal doesn't need tons of dialogue or flashbacks to tell his story, instead he uses facial expressions, shadows and subtle hints to put the story across.

I was really impressed with the artwork too.  It really suited the story.  The best way I can think of describe it is that the stark black and white nature of the artwork makes it look like a classic black and white movie from the Universal horror years.  That really makes the impact of the strange goings on in the house more full on and shocking.  Like I said earlier, Dave Neal's use of shadows and facial expressions gives the story quite a cinematic look as well.

All in all, I would very highly recommend this because it is a real 'page turner' as they say.  I just couldn't wait for the next page to see what was going to happen next and you can't really ask for more than that from a graphic novel can you?