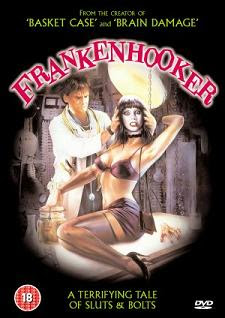 Synopsis
The Frankenstein legend gets stitched up by the makers of Basket Case and Brain Damage in this outrageous horror comedy. When his pretty fiancée goes to pieces under the blades of a runaway lawnmower, aspiring mad scientist Jeffrey Franken hatches an unorthodox scheme to bring his beloved back to life.

With the help of an explosive super drug, Jeffrey reassembles his girlfriend from the body parts of New York prostitutes. But his dream-girl runs amok on 42nd Street, turning tricks that literally make people's head's spin.

Can Jeffrey still find true love, or has he created a monster...?

Review
Frank  Henenlotter is a legend of low budget horror / comedy movies from the 80’s and  early 90’s.  The director of the ‘Basket Case’ trilogy and ‘Brain Damage’ has turned his hand here to a ‘Frankenstein’ story with a difference.

In fact the best way to describe this random as hell movie would be to combine Russ Meyer via James Whale and you may have a little idea of what to expect in this movie.

Henenlotter’s trademark humor is most definitely here and runs through the entire movie.  There are a lot of instantly quotable lines and some absolutely hilarious moments that had me literally crying with laughter.

The cast do a superb job with the campy but knowing dialogue and some of the performances are wonderfully over the top, which really adds to the fun nature of the movie.  The low budget does show through a little with the deaths but in all honesty, they are still done much better than other  low budget movies of today.

The direction and look of the movie is done in much the same way as fellow Shapiro-Glickenhaus movie ‘Maniac Cop’ and makes really good use of the city setting.  Henelotter really does get a hell of a lot out of his cast ranging from intentionally funny moments from them and some great background moments as well.  No matter how many times I watch this movie, I always manage to notice something new.

The special features are really disappointing however.  A trailer for the movie itself as well as 3 other movies from the same era that Shapiro-Glickenhaus have released.  I would have really liked a commentary or a making of, even if it was a really short one but alas, not to be.

If you like campy, low budget fun then get this superb horror comedy from the creator of such cult classics as the ‘Basket Case’ trilogy.  Turn off your brain, kick back and enjoy.