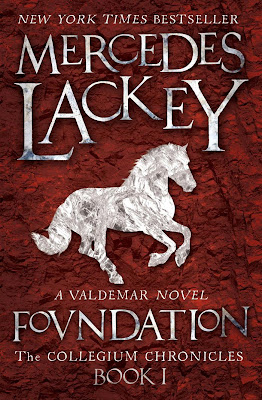 In this chronicle of the early history of Valdemar, a thirteen-year old orphan named Magpie escapes a life of slavery in the gem mines when he is chosen by one of the magical companion horses of Valdemar to be trained as a herald. Thrust into the centre of a legend in the making, Magpie discovers talents he never knew he had, and witnesses the founding of the great Heralds Collegium.

Review
Mercedes Lackey is most definitely one of the most prolific authors in the fantasy genre.  After 20 plus years and over 100 books, her novels appear to have no intention of stopping or of slowing down.

You would honestly think that after writing that many books that the writing would inevitably suffer or some of the stories would be sub par but that isn’t the case here.

In fact, I would honestly go so far as to say that this  is one of her best ones for a very long time.  While it’s true that it is set in her usual world of Valdemar, you need not have read any of her other novels to be able to enjoy this one.  ‘Foundation’ has been written in such a way that even though the characters are new and the storyline is new, it has an air of familiarity about it.  It’s the book equivalent of putting on your favorite pair of slippers.

The characters themselves are fantastic and the reader really can’t help but get emotionally involved in their journey.  This is especially true of the young main character Mags, who after being rescued from a deadly mine starts his journey in to becoming the person he was born to become.  The way the Mags character has been written is beautiful in his simplicity and honestly feels like you are hearing the words and world view of someone his age.

I also liked the way that while the story doesn’t have major show downs or bloody battles, as are the norm for this genre, the gentle pacing gives the story and characters room to grow and breathe.  The way Mags and his friends grow personality wise during the novel and then the way they  deal with the exciting conclusion is evidence of Lackey’s skill at creating characters you learn to really care about.

This is a great start to the new series of novels by Mercedes Lackey and I honestly can’t wait to get my hands on the second one.  Highly recommended.

Contact Me On @PatChallis82
Posted by Pat Scattergood at 13:55