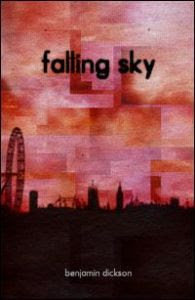 
The world is soon to end, but not everybody knows this. What will those in power do to keep their secret?
Follow the pulse pounding story of two people trying to make sense of their lives while the world literally falls apart around them.

I have always loved stories about the end of the world.  It never mattered to me whether it was a novel, a comic book, film or anything else because when a story like that is done well then you have a nerve shredder on your hands.

This is one of those times.

'Falling Sky' is like nothing you have read or seen before.  In fact, I would even go as far to say that it  puts a rather unique spin on the whole 'end of the world' scenario.

The writing is incredibly strong and definitely some of the best that Benjamin Dickson has done in his career and that's saying something considering this is the guy that wrote 'Marraquai' and 'Slumdroid' amongst others.  Most writers would give their right eye to have one of those on their resume yet he has those and this release.

Characters wise, this story gives them a real sense of reality.  Nobody is a Bruce Willis style hero here.  Nobody magically indulges in superhuman feats of endurance or skill.  In fact, it's a bloody nice change to see characters that just act like someone off of the street.

On paper that may not seem all that exciting but with a writer with the level of skill that Dickson has, the characters really pop off the page and you can't wait to see what is going to happen to them next.  The relationship between the two main characters really grows as the story progresses.  It turns from kidnapper and hostage into friends and eventually lovers.

The ending is very heartbreaking as well.  If you are expecting a happy go lucky ending then you are out of luck.  I love how the ending is full of dread yet there is a strange sense of the characters coming to terms with all the things that have happened without a single bit of melodrama.

The artwork here is like nothing that I have ever seen.  It sounds like a cliche but it is totally unlike anything I have ever seen before.  It's stark, brutal but very beautiful.  How Dickson manages that is completely beyond me but I was continually surprised at the moments of simple beauty with each passing page.  The use of the 'little things' that really ramp up the quality of the artwork and that is true here.

All in all, this manages to be one of the most beautiful stories that I have read in the graphic novel world for a long time and yet the story itself is full of a sense of dread and sheer menace.  Highly recommended.