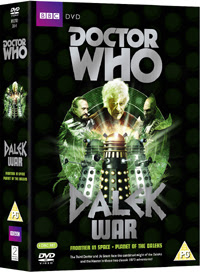 Cast
Jon Pertwee as The Doctor
Roger Delgado as The Master
Katy Manning as Jo Grant, The Companion
Vera Fusek as The President
Michael Hawkins as General Williams

'Frontier in Space' - The Doctor and Jo Grant are caught up in the tensions between Earth and the Draconians.  With war looming on the horizion, is there someone pulling the strings?

'Planet of the Daleks' - After being gravely wounded The Doctor lands the  TARDIS on the planet Spiridon, home to a race of warmongering Daleks.

'Planet of the Daleks'

Here he has to try to save the universe from some of his deadliest foes in this box set containing two six part stories from 1973.

The stories themselves are really well done, although 'Planet of the Daleks' is a little underwhelming.  I really liked how they pushed the political intrigue and back  stabbing that was so apparent in 'Frontier in  Space' to the forefront, which in turn gave the story a 'Cold War' feel.  That's pretty apt as the Cold War was at it's height when these episodes were filmed and then shown.

'Planet of the Daleks' is a retread of an earlier story but in a nice bit of continuity by the writers, the events in that story are actually mentioned.  I really like it when long running shows such as this one sneak little moments like that in.

The cast do a fantastic job.  Jon Pertwee and Roger Delgado have always have a great chemistry and that really raised the bar for the characters, however here Delgado, in his last appearance as The Master, absolutely acts Pertwee off of the screen.  That's not an easy feat.

Sadly Delgado passed away due to a car accident shortly after finishing this story so perhaps it's a fitting tribute that his best performance is his last.

The special effects may be a bit dated now but it's the sheer strength of the writing that has always endeared the classic stories to me and here's no different.

Special features wise, this is a superb selection of goodies for us Doctor Who fans.  In fact, we have been positively spoiled.  The best of these by far is the documentary about the late, great Roger Delgado.  It was a very nicely put together and touching tribute to a  criminally under rated actor.

All in all, I would say that this is a very highly recommended set for fans old and new alike.