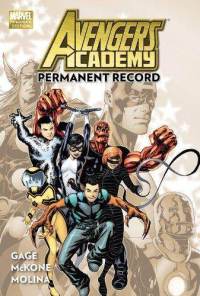 Synopsis
Determined to keep the tradition alive, founding Avenger Hank Pym leads a core team of veteran heroes in creating a place where the next generation of Earth's Mightiest can be trained by the greatest of those who preceded them. An institution where everyone who has ever been an Avenger can share their skill, knowledge and experience. The future is in their hands...and in the hands of the six young super-humans chosen to make up the inaugural class. But who are they?


Review
Just recently we have been absolutely bombarded with so many new ‘Avengers’ titles that they have all begun to merge in to one so when I heard they were going to do a ‘X-Men First Class’ style storyline with an eye to creating yet more Avengers, I was highly dubious that it would be able to stand on it’s own as a title.

I couldn’t have been more wrong because what we have here is a rather interesting take on the whole idea of new heroes being trained up.  There are some really good and  well rounded new characters, only one of which has been seen before in the shape of ‘Reptil’, and loads of stories all running together yet without feeling cluttered.

The  characters here are very well written and you can really get behind the characters.  Each one of them has their back story revealed one issue at a time. My favorite of these being the story behind the character of Striker, although the other stories are just as rewarding.  Alongside these introductions there are stories concerning Norman Osborn and the aftermath of his experiments and the reasons behind why these particular people were chosen for the training scheme,  Both of these throw up some interesting twists and turns.

The artwork here is absolutely great.  The panels really pop off the page, especially during the battle and training scenes.  Another great thing about the artwork here was the sheer amount of detail.  Even on the ‘quieter’ scenes, the art really brought the characters here to life and they looked great next to the more established characters in the story.

Overall I would highly recommend this release.  I had started to get quite jaded with the amount of reboots  and new team ups that the Avengers were getting in to but here, I really enjoyed seeing a new team being trained.  Both the writing and the art worked very well together and I personally can’t wait for the 2nd volume of issues.